Polish-Czech Youth
a Chance for a Better Future

Polish-Czech Youth
a Chance for a Better Future

The Project is an online project. The potential recipients of the project are young people aged 18-35. The subject of the project will refer to the changes taking place in the world due to COVID-19.

The project participants will be examined in terms of concerns arising from the new situation in the world related to the labor market, the transfer of life to virtual reality and changes taking place in the V4 countries and the entire EU. As part of the project, two forms of online workshops Fake News and the importance of Poland and the Czech Republic in the context of the entire V4 will be conducted, and online debates during which project participants will be able to share their observations. The project will end with the publication of 3 articles in the Polish and Czech press promoting the research carried out within the project and the project itself.

REPORT FROM THE WORKSHOPS


The history of the V4 and how to building International Partnerships

Origin of Visegrad group- consists of four states: Poland, Czech Republic, Slovakia and Hungary. At the beginning it was just Poland, Czechoslovakia and Hungary. In the XIV century, in Visegrad Castle, two meetings took place with the king of Poland, Casmir the Great, John of Luxembourg and Charles of Anjou, Hungary. Two summits took place: in November 1335, and the second in the summer of 1338. The aim of the first was to settle the nationality of Gdańk, Pomerania and Kujawy. The second summit’s aim was to establish relation with the Czechs.

During the medieval ages, Poland had great experience with regional cooperation. The most important event was the Union of Lublin, which took place on July 1st, 1569 in Lublin. It was signed by the King of Poland and the Great Duchy of Lithuania. This Union established that there was one state and the King of Poland was also the Grand Duchy of Lithuania. This time of common union was very important to the regional cooperation.

During the interwar period there was another very important regional cooperation, the Intermarium idea, a doctrine of Polish foreign policy relating to the multicultural tradition of the Polish and Lithuanian commonstate and also relating to Poland, Czech and Hungary later. This idea talked about the common cooperation in security, political and economic level between Germany and Russia. The problem was with the implementation of it- Poland had conflicts with many neighbors at the time.

In 1991, the Visegrad triangle was formed. It was a time of criticism of the communist past, recognition of borders, dismantling of the Warsaw Pack, Red army’s withdrawal from Central Europe, as well as the integration with the European Union and NATO. Time between 1993 and 1998 was a time of lower activity of the Visegrad states. It was a different approach of the states to the cooperation and integration with the European Union. During this time Czechoslovakia was divided at the beginning of 1993 and divided into two states. In the Czech Republic Václav Klaus was the Prime Minister and Vladimír Mečiar was the Prime Minister of Slovakia. Vladimir Mečiar was very skeptical about the integration with the European Union and NATO because at the time Slovakia had a very good economic, military and political relation with the Russian Federation-it was natural for the Prime Minister to be against this cooperation. Václav Klaus was also skeptical about the cooperation with Visegrad. From 1999 to 2004 the main goal was the membership in NATO and the European Union. International Visegrad Fund was created during this time as well.

In the present the biggest problems are with negotiating the European Union budget for the next 7 years, negotiation of the climate and energy package as well as the contribution to the development of the European Neighborhood Policy. The Visegrad states are very active when it comes to the coopertation with Ukraine, Serbia and west Balkan states. In 2016 Visegrad military group was created. There is a common deal when it comes to the immigration policy- all in all there are many common goals as well as disagreements within the Visegrad group. In the lecturer’s opinion within the next year new goals for the states should be defined, the budget of the International Visegrad Fund should also increase. 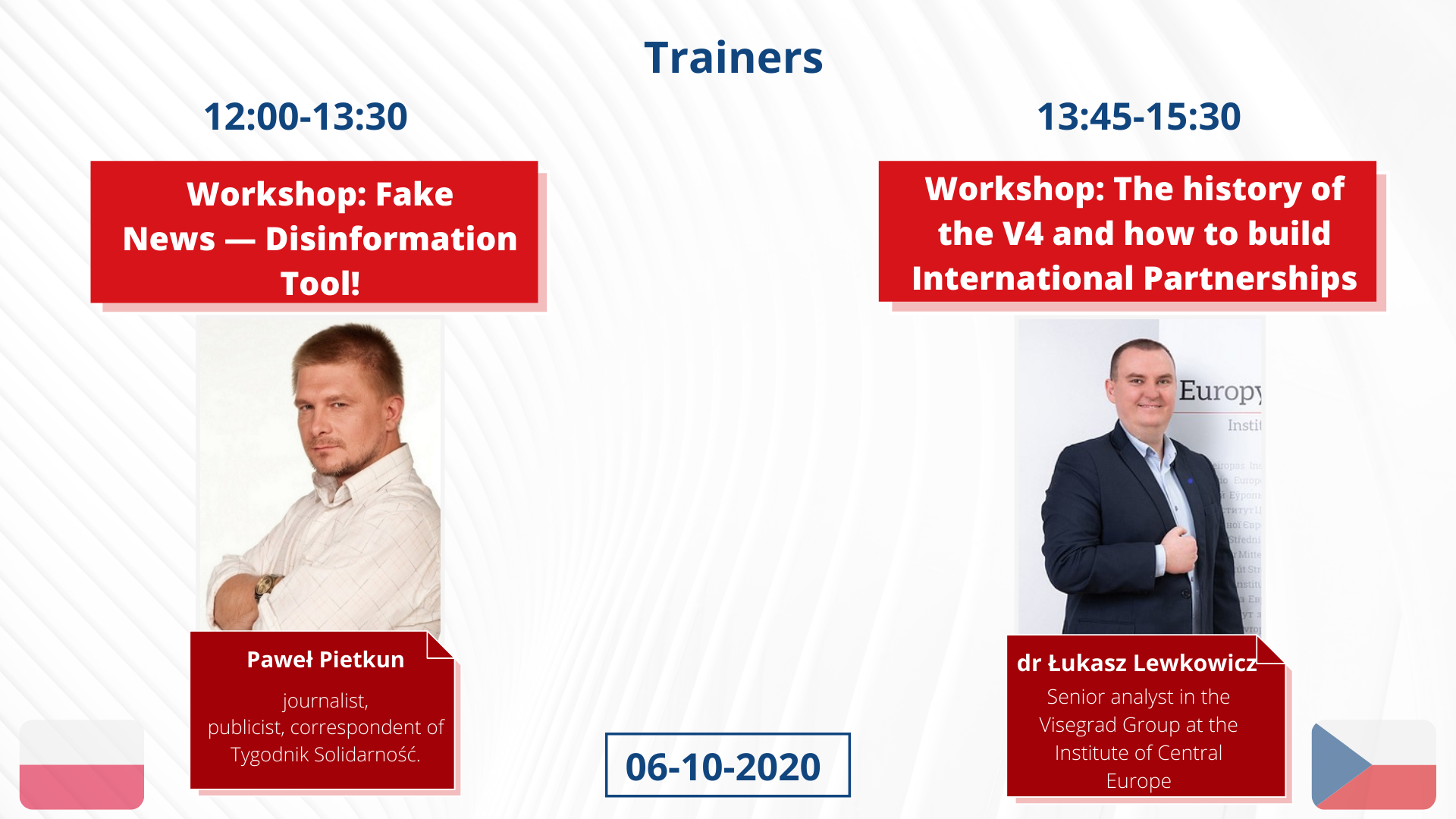 The biggest tool for fake news is the Facebook news feed. In just 2019, the top 100 fake stories were viewed 150 million times. Most of the time, news is spread by people but a majority is spread by bots. These are pragrammes that automatically do tasks. They often pretend to be real people by automatically writing messages or doing other things that people do online. If many bots are used together, they create a buzz around a certain person, issue or topic, to push a point of view or agenda. Some people even pay bots to push and promote their products or posts.

How to tell if it is a bot? - no picture, no biography and no followers are clear indicators of it being one. Lots of posts in a short amount of time are also bot behavior. Also, if the account is talking about only one subject for days and days, that is also typical behavior for a bot.

Finland is winning the war on fake news. Its anti-fake news initiative was launched in 2014 by the government. During the trainings of the initiative, attendees were made up of students as well as working people are retirees. They learned how to distinguish a real from a false account on social networking sites, how to recognize manipulation of images and videos, as well as how to recognize a bot.

Most press agencies have special services dedicated to fighting fake news. If you are journalist always remember to double check the source.

Some of the ways to detect fake news is to find witnesses if possible, check government and police websites and ask official press services.

Do not duplicate information on social networks if you are not sure.

Do you think we should organize mandatory fake-news classes in school to protects from false information on the internet?

- I think the government should create classes, information classes, that teach young people to find false information, how to watch TV, read on the internet. The information is something we use for making money, making someone richer, make politicians- it's important to start with these types of classes.

- simple people do not care about information, they are mostly focused on news about actors, singers etc., this information would be more important than information from the, for example, economic world. The government should propose special programs for people. People of all ages, like in Finland. 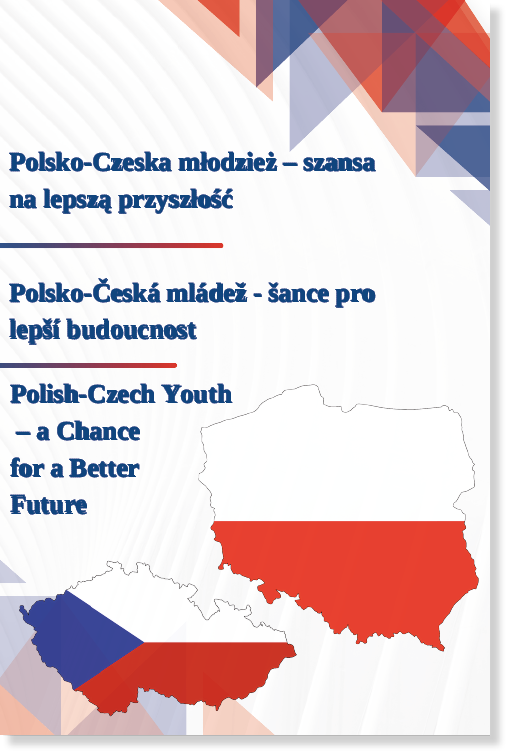 "Polish-Czech Youth — a Chance for a Better Future"
Public task co-financed by the Ministry of Foreign Affairs Republic of Poland
in the framework of the competition Polish-Czech Forum 2020.